The multinational operation, Liberty Global needed a unified managed print service that would work across national borders for all of its departments in six European countries. 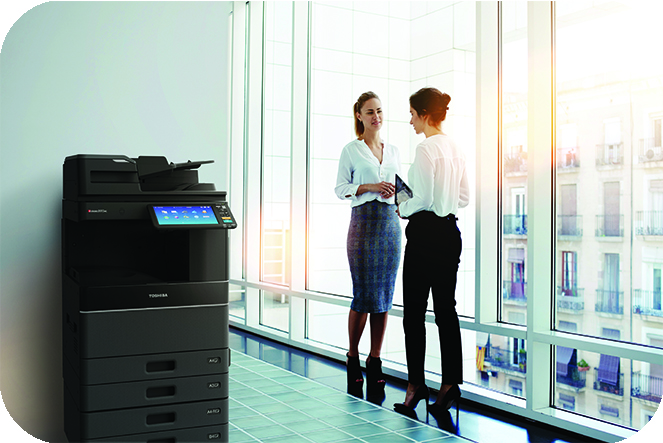 Liberty Global is one of the world’s leading converged video, broadband and communication companies, with operations in six European countries under the consumer brands Virgin Media, Telenet and UPC. As a multinational operation, Liberty Global needed a unified managed print service that would work across national borders for all of its departments. After carrying out a discovery audit, Toshiba Tec met this need by supplying and installing more than 50 multifunction printers (MFPs) on Liberty Global sites. This new printer estate is on course to deliver annual cost savings in excess of 30%.

Given the international reach of the project, Toshiba Tec analysts started by conducting a detailed audit on one site - the Liberty Global Schiphol campus in the Netherlands. They subsequently extended the scope of their findings by assessing the requirements for Liberty Global’s HQ in Hammersmith, London. This provided Toshiba Tec with the data it needed to develop a bespoke solution for Liberty Global’s printing requirements together with a detailed implementation plan that would meet each site’s operational needs. The plan included a clear timeline and post-implementation support, with both of these elements contributing to the success of this demanding international project.

A key finding from the audit on the Schiphol site was that this was a considerably large print estate of 93 printers, but analysis showed this number could be considerably reduced if they were replaced with the latest Toshiba MFPs, complemented by PaperCut, Toshiba Tec’s recommended print management software. With 65% of the total output for the site consisting in colour printing, Toshiba Tec set out to finding a solution that would help Liberty Global reduce its OPEX. Switching from colour to monochromatic printing led to a 70% saving in the first three months of the contract alone.

Essentially, Toshiba Tec proposed a uniform MFP estate comprising 50 A3 colour MFPs in Schiphol and 6 A3 colour MFPs in Hammersmith.These models are from the latest generation of printers that provide print speeds of up to 55 pages per minute. By streamlining the printer estate in this way, it was possible to simplify the procurement process while ensuring that every department would enjoy the full benefits of Toshiba’s latest print technology, as well as the PaperCut software, including pull printing functionality and mobile printing. The proposal also included training and after-sales support.

“The new printers are intuitive to use, they’re much faster than our old machines and the print quality is much better,” enthused Lavinia Valean, Team Leader at Liberty Global. “In addition, the support and training we received from Toshiba Tec were excellent. Toshiba has also provided a full-time on-site engineer for us, who is extremely knowledgeable and always makes himself available to answer our queries - in fact, we now consider him to be an integral part of our team!”

An essential feature of Liberty Global’s new printing systems is the extended functionality provided by PaperCut. This software allows users to easily manage their print assets, collect usage data by location and device, identify inefficiencies, and implement cost recovery and allocation strategies to maximise system productivity and return on investment. Liberty Global is currently using it for monitoring usage locally and for company-wide centralised reporting.

“When we offered the new printing systems to Liberty Global, we aspired to delivering a minimum of 30% cost savings against current spend levels,” said Ben Gaston, Sales Director at Toshiba Tec. “Our experience to date at the UK and Schiphol sites leads me to believe that we will not only reach this figure, but significantly exceed it. We are currently looking at an overall five-year saving, including CAPEX, of almost £600,000 and a return on investment time for the new printers of only one year, which is, from any angle, pretty impressive!”

The deployment of the new printers in the Netherlands took only two weeks, while deployment of devices in Hammersmith took just a couple of days. These periods include the time required to remove the old printer estate before installing the new Toshiba Tec machines.

“The rollout has gone brilliantly well: in fact, there have been zero issues reported that are related to the printers themselves. Everyone is excited about the new Toshiba Tec printers and we are getting a lot of positive feedback from users,” enthused Hans Bokhove, Senior User Support Specialist at Liberty Global.

Lavinia Valean, Team Leader at Liberty Global also commented, saying that “Toshiba Tec was very understanding about our timelines; we had a lot of old printers that needed to be taken out before the new ones could be installed and we had nowhere to store them on site. That meant very careful co-ordination was needed. Toshiba Tec responded by delivering the machines on a staggered schedule that meant there were no bottlenecks and no disruption. It was a carefully choreographed plan which made it possible for us to continue working as usual throughout the whole process.”

Following the success of the Liberty Global site deployments, Virgin Media – Liberty Global’s largest brand – has deployed 168 MFPs, with PaperCut software, across all sites. Toshiba has installed 141 mid-volume A3 colour MFPs and 27 high-volume A3 colour MFPs, supported by three dedicated onsite engineers in key locations. Automated service support from Toshiba’s highly responsive support centre in West Bromwich – managing Toshiba Tec technicians across the UK was also included. A well-co-ordinated deployment commenced in July and completed in November, with Toshiba Tec seamlessly dovetailing their resources into a change of timeline requested by Virgin Media. This is the third time Toshiba Tec have provided a new national print estate to Virgin Media, underlining their faith in the excellent user experience, service delivery and account management provided by Toshiba’s team.

Jackie Clarke, Service Design and Delivery Analyst at Virgin Media, commented, “I didn’t have to direct anything to the Toshiba team, I explained what was required and the team split off, did their job and updated me when required. I have enjoyed working closely with Toshiba Tec on this project and we can gladly say everything went really well. We look forward to working with them for the next five years.”

Another important aspect for Liberty Global was maintaining its green credentials. Toshiba Tec partners with CO2balance to deliver its Carbon Zero Scheme to help compensate for CO2 emissions by offsetting its products. Carbon offsetting allows for investment in projects that save the emission of or absorb an equivalent amount of CO2 to that associated with Toshiba Tec’s print portfolio, so that the products are effectively delivered carbon neutral. Saving money and resources, whilst safeguarding the community through Carbon Zero initiatives makes Toshiba Tec the document management provider of choice, locally and globally!