Calculating, reducing and offsetting your carbon footprint is an effective way to take responsibility for your contribution to climate change. Though it's understandable it raises some key questions. Here, we address some of the common myths to help provide a better understanding of what carbon offsetting is really about. 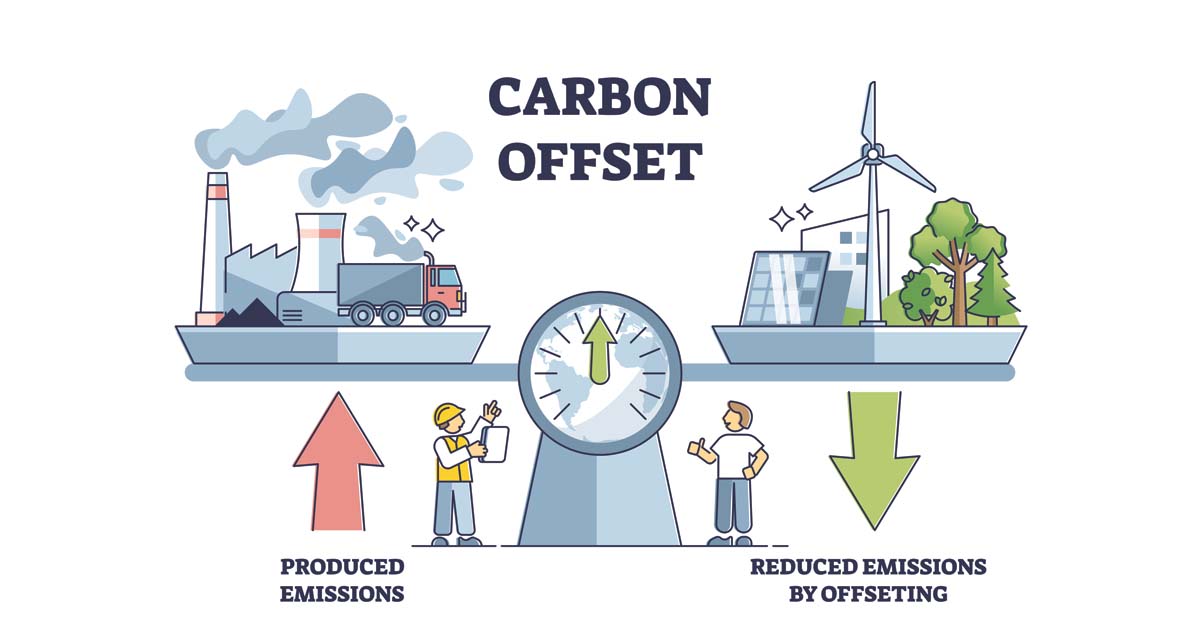 Managing carbon emissions is a key issue for organisations who wish to mitigate climate change. Calculating, reducing and offsetting your carbon footprint is an effective way for companies to take responsibility for their own contribution to climate change. However, it is understandable that there are some key questions around the practice of carbon offsetting. Amid frequent accusations of greenwashing, many people have been left confused and lacking trust towards businesses who embrace the scheme.

To help answer those burning questions you may have, based on research carried out by the International Carbon Reduction and Offset Alliance (ICROA), Toshiba Tec UK and CO2balance will help you understand what carbon offsetting is really about. And, we will try to debunk some very common myths.

Myth #1: Carbon Offsetting is the easy way out from taking real action

Some argue that instead of purchasing offsets, buyers should only make efforts to reduce their own footprint. With critics suggesting that buyers purchase offsets to assuage guilt or to improve their image, rather than making a real commitment to emission reductions.

To demonstrate their genuine environmental commitment, offset buyers are more likely to run internal campaigns to directly reduce their overall carbon emissions, offsetting any remaining unavoidable emissions. Many organisations adhere to the ICROA Code of Best Practice, which encourages organisations to set challenging targets to go beyond business-as-usual. They will also assess further emission reduction opportunities and prioritise cost-effective actions.

Data collected by Ecosystem shows that offset buyers slashed their direct emissions by almost 17%, while non-buyers only reduced emissions by less than 5%. Companies that purchase offsets are 5 times more likely to internally cut carbon emissions. They are also twice as likely to have a dedicated budget for low carbon R&D.

Myth #2: Emission reductions are not real

Some sources state that offset projects do not result in real and practical emission reductions. They often argue that additional projects funded by carbon offsetting schemes would have happened anyway without the sale of carbon credits. There are also claims that third party monitoring and verification is too loose, and statistics are unreliable.

With the ICROA recommending a Code of Best Practice, members such as CO2balance commit to selling offsets certified only by internationally prevailing carbon standards, such as:

These standards include rigorous additionality tests via third party organisations, often at the location of the project itself. Such projects need to prove that they would not have reached financial closure without the sale of offsets, and are typically carried out once a year.

Toshiba’s Carbon Zero Scheme’s Energy Efficient Stoves Project uses carbon credits to help fund stoves, offering a cleaner and more efficient use of firewood for cooking. This directly saves not only on emissions from burning firewood but is helping to reduce deforestation, conserve natural habitats and improve health of users.

Though companies may offset their own emissions, they are sometimes criticised for not addressing indirect emissions, such as those related to products. For instance, environmentalists point out that a bank cannot be considered carbon neutral if it still finances fossil fuel projects with significant impacts on emissions.

Fact: There is now a growing focus on the offsetting of Scope 3 emissions

The standard of environmental performance is increasing as offsetting becomes more common. More companies are offsetting their Scope 3 emissions or indirect emissions from products and supply chains (just like our Carbon Zero Scheme!). Some companies are choosing to facilitate the purchase of offsets along with purchase of additional products (e.g., offsetting pages printed from your MFP).

Direct emissions from all activities conducted by the business. This can include logistics, factory emissions and boilers or air conditioning. These are indirect emissions utilised by the company to operate, such as the factory or offices electricity supply. This entails all over emissions which the company doesn’t directly control. From international delivery networks & business travel to waste management.

Critics are concerned that offset providers overstate or misrepresent the social benefits associated with emission reduction projects. They fear that the local communities to which they are meant to accrue do not necessarily value such co-benefits. Critics claim that co-benefits make only a minor impact in locations faced with deep-rooted problems.

Recent studies use robust methodologies to quantify the co-benefits of emission reductions projects in the voluntary market. A study carried out by the ICROA found that every ton of Greenhouse Gas reduction delivers up to $664 USD in additional economic, social and environmental benefits.

There is the additional, while more difficult to quantify, benefit that funding from carbon credits helps drive growth of greener and more economical innovations, such as bio-aviation fuel and low-carbon cement.

Since carbon offsetting is a voluntary initiative, companies can engage in unfair marketing or stop offsetting from one year to another. They can decide to keep the offsets in a registry account instead of retiring them. They may publish information on a project but actually retire many more offsets from other, cheaper projects, that are not publicised.

Fact: Code of conducts and third party audits are key

Voluntary carbon offsetting typically forms part of many companies’ wider Corporate Social Responsibility (CSR) activities aimed at improving reputation and company value. Therefore, it is in these organisations’ own interest to avoid any criticisms and to have a genuine environmental commitment. There are also plans from the TSVCM on improved regulations for any offset schemes planned and in place.

Many companies engage in third party auditing of their CSR Reports. The CDP Climate Disclosure Leadership Index, for instance, lists companies that excel in transparency of climate-related data, including information on offsets. ICROA members commit under the Code of Best Practice to always retire carbon credits used for offsetting and to encourage clients to communicate their carbon footprints and acquired offsets fairly.

Some argue that the types of businesses that are offsetting their emissions have very small footprints to begin with. For example, the financial sector has been particularly engaged in carbon neutrality, yet it is among the least carbon-intensive sectors. Therefore, the total volume of retired carbon offsets for voluntary reasons is low compared to global emissions levels.

Voluntary demand for offsets typically comes from sectors that are not covered by any form of carbon regulation such as transportation, finance & insurance, services, and technology. Energy-intensive sectors such as power, oil and pulp & paper already face emissions caps imposed by governments. These industries often purchase carbon offsets for compliance rather than for voluntary reasons.

Although the amount of offsetting carried out by voluntary action alone is not sufficient. Action in the carbon offsetting arena is important, as small progresses are being made in terms of education, awareness and actual environmental impact. Alongside this, governments are drawing extensively on voluntary project methodologies and market frameworks to support emerging carbon pricing regimes.

Providing innovative solutions for the workplace.